The roads, towns and cities of the attractive island of Sardinia make a perfect backdrop for the excitement, thrills and colour of “Rally Sardinia 2022 WRC”, the Italian round of the World Rally Championship (WRC), to be held from the 2 to 5 June 2022 in Alghero.

This year the 18th edition of Rally Italia Sardegna, the fifth round of the World WRC 2021 will have its base in Olbia (east coast of the island). The assistance park will be located in the Molo Brin (Brin dock).

Program for the 2021 edition in Sardinia:

The rally makes a spectacular attraction for visitors to this friendly and welcoming island, one that is sure to test some of the world’s greatest drivers to the highest levels.

The 2020 edition will be split between Olbia and Alghero; the opening ceremony will be hosted by Olbia, while the headquarters is confirmed in Alghero. The shakedown as usual will be in Olmedo (3,86 km) on Thursday in the stunning environment of the bauxite mine.

Program for the 2020 edition in Sardinia:

The schedule is as follows:

The World Rally Championship (WRC) is one of the premier motor-sport series in the world, and takes place in various countries (Kenya, Japan, New Zeland and Monte-Carlo) throughout the 2020 season.

The 2019 edition program, highlights and results

This is the program for the 2019 edition in Sardinia:

The Sardinian event is one of the most popular on the 2019 calendar, offering easy access to spectators and a fine chance to visit this charming and unique island and watch some very fast cars too!

For dads and kids especially, the chance to combine Rally Sardinia with a family holiday is one that cannot be overlooked.

– Friday 8 June, morning: The Norwegian Andreas Mikkelsen of Hyundai Motorsport, (Hyundai i20 Coupe WRC) is at the top of the general classification after five trials, thanks to the successes in Tula and Castelsardo.

– Thursday 07 June: Jari-Matti Latvala (Toyota Yaris WRC) was the fastest in this morning shakedown in Olmedo. The Rally Italy Sardegna 2018 will start officially with the first special in the Ittiri Arena at 6:00 pm.
The French pilot Sebastien Ogier was the fastest in the first special test of the Rally Italy Sardegna in the Ittiri Arena; second place for Andreas Mikkelsen, third place for Thierry Neuville.

The WRC world champion and popular Italian rally driver Miki Biasion to attend the Rally Italia Sardegna 2018 in June. The driver will race with a car provided by the FCA group, most probably the Fiat Abarth 124 RGT.

More news about the 2018 edition: the assistance park will be located among the docks of the harbour in Alghero where all the major teams (like Ford M-Sport, Toyota, Hyundai and Citroen) will be housed, while the teams registered to the WRC2 and WRC3 will be housed in the Piazzale della Pace (facing the harbour).

The race direction, the press room and the Rally headquarters will be hosted in the Quarter of Largo San Francesco, in the heart of the city.

This year the Park Fermé will be hosted in Alghero as well ( in the Calata Sassari and its ramparts).

With its 21 special stages the 2018 edition will start as usual with the morning shakedown (Thursday 7 June) in Olmedo Monte Baranta (3,97 km) followed by the super special in the Ittiri Arena (2 km) at 6pm. On Friday 8 June there will be more timed specials in Tula, Castelsardo, Tergu and Olmedo on a total of almost 317,32 kilometres.

On Saturday 9 June there will be the specials of Monte Lerno, Monti di Alà and Coiluna-Loelle on a total of almost 149,10 kilometres.

On Sunday there will be the specials of Cala Flumini and the Power Stage of Sassari-Argentiera (broadcasted live on television) on a total of 42,04 kilometres. Finally, the rally will end with the classic party on the arrival Podium hosted in the harbour.

The 2017 edition program, highlights and results

The 2017 edition was hosted once again in Sardinia with the charming city of Alghero as the main headquarter and 19 special stages which covered more than 320 kilometres through the tight roads of the north Sardinia.

The 2017 edition’s novelty was the parc fermè which was set up in the Olbia pier as the first stage started around the Olbia province.

On June 8th the drivers were involved in the morning shakedown (4,11 km) held in Olmedo at 8:00 am. The cars then left from Alghero to the Ittiri Arena Show at 6:00 pm and then entered the Parc Fermè at 8:30 pm.

On June 9th the cars left the Parc Fermè at 6:30 am and the drivers were very busy with many special stages in Terranova, Monte Olia, Tula. Back to the service park in Alghero at 8:30 pm.

On Saturday June 10th the drivers started really early (5:00 am) as the races was held in the eastern part of the island (Monti di Alà, Coiluna). Back to Alghero at 7:15pm.

On the final day the cars left the Alghero service park at 7:30 am and the drivers were involved in several races in Cala Alumni and Argentina just before coming back to Alghero for the finish podium.

As befits its prestigious status, Rally Sardegna (official site: rallyitaliasardegna.com) will see some of the world’s top drivers compete against each other and the clock.

There is nothing like the WRC for sheer spectacle and driving skill, and the speeds achieved by the cars on the Sardinian roads and special stages will be amazing to behold.

With a changing landscape and wonderful views, this amazing island will be proud to host one of the most exciting motor-sport events of all, and many thousands of fans will flock to the roadsides to witness the action first hand.

Last year the rally began on day one with a special stage in the village of Olmedo (Olmedo – Monte Baranta), where the high powered race cars were involved into a specially constructed circuit for the shakedown.

For the final day, the showdown on Sunday, the route involves a loop from Alghero that heads inland on some quite stunning roads which take the cars into the hilly, before taking a route that heads north then back down the coast to the finish at Alghero.

06/09/2016 – First shakedown of the season in Olmedo (Sassari) today 9 June and first race at the Arena Show located in Ittiri at 6:00 pm. Sébastien Ogier will attend as well after his rumoured absence.

Today the Belgian driver Thierry Neuville has strengthened its leadership in the Rally Italia Sardegna after four special stages in the afternoon. The Hyundai driver is leading the championship on Jari-Matti Latvala and Sebastien Ogier.

06/12/2016 – Thierry Neuville wins the Sardinia WRC 2016! Second place for Jari-Matti Latvala and third for Sebastien Ogier. That’s all for now, see you next year for the Sardinia Rally 2017 WRC.

The 2015 edition started with an amazing shakedown in the Cagliari harbour.

The second day saw the cars heading in the whole province of Sassari on a route that takes in some of the most beautiful scenery in Italy.

After a cross-country run on some of the most challenging roads on the island, drivers skirted the north coast from Castelsardo to Alghero, giving spectators the chance to see them push their vehicles to the limit.

The third day, Saturday, was a popular choice for those wishing to experience the thrills of rallying, as the teams and drivers – including reigning champion Sebastian Ogier in the spectacular VW – head across the island from, Alghero to the tricky stage at Monte Lerno, then returned to Alghero for the night before heading out on the final day.

13/06/2015 – Hayden Paddon is leading the championship after the nine specials of Friday – the sixth round of the WRC. WRC champion Sebastien Ogier is following on the second place.

14/06/2015 – Sebastien Ogier takes the lead in the WRC after the third day of the Rally Italia Sardegna 2015. Hayden Paddon on Hyundai is now on second place.

Final day: Sebastien Ogier on Volkswagen Polo is the winner for the third time in a row of the race on the roads of Sardinia Italy and consolidates its leadership in the overall standings with 66 points of advantage on Ostberg who has placed in fifth place.

Visit Olbia and attend the Rally Sardinia hiring a car at the Olbia airport.

With the promise of a combination of spectacle, sound and excitement, Rally Sardegna is a motor sport fans delight, and with easy access via the islands airports, great weather, amazing Sardinian beaches and fabulous food, there are plenty of reasons to make Sardinia the destination for the perfect summer holiday. 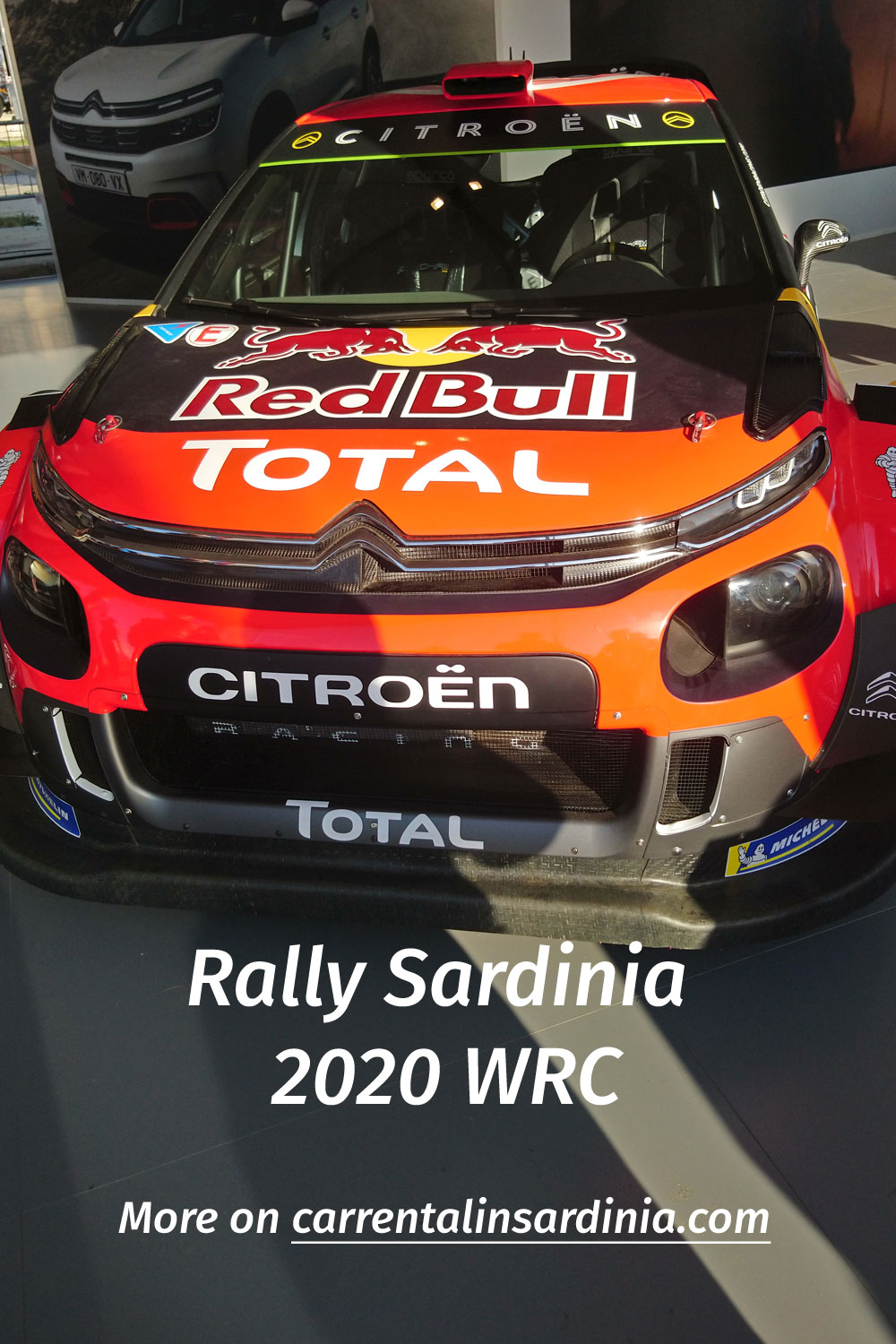